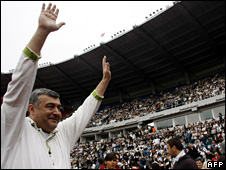 Yesterday the Georgian opposition held a 60,000 strong rally to demand that President Saakashvili resign. The culmination of six weeks of protests, the event was timed to coincide with a military parade marking Georgia’s Independence Day. The parade was called off to prevent possible violent clashes.

Following calls for ‘direct action’ by some activists, a large crowd converged on Tbilisi’s main station and tried to block trains. The change in tactics is controversial as some opposition leaders suspect it might give the president the perfect excuse to step up his government’s occasionally brutal suppression of protests.

The clamour for an election to replace Saakashvili has been growing since his military adventurism in South Ossetia last year. The recent ‘coup’ by an army battalion, due to participate in Nato exercises, heightened tension. The opposition claimed, with possible justification, that the so called mutiny had been staged in order to distract from its protests. Saakashvili implied involvement by Russian provocateurs, a manoeuvre characteristic of the president when he faces dissent.

Despite infatuation with the Georgian leader, from many quarters in the United States and Europe, there is a substantial and growing body of evidence which contradicts his supposed democratic credentials. And there have been a few indicators that western leaders might be becoming more circumspect about Saakashvili as the dust from last year’s conflict settles and popular resentment in Georgia grows.

To combat nascent international disillusion, particularly in Washington, the Georgian president has poured resources into polishing his regime’s image in the United States. Neither anti-Russian sentiment, which is easily harnessed in support for Saakishvili, nor slick American propaganda, should blind observers to the unpleasant character of the present regime in Tbilisi.
Georgia Post Soviet states Russia Saakashvili United States

Dinamo said…
I think more work should be done to work with georgia, ukraine, belorussia to develop a process where these areaas could re-unite with russia in a new USSR-type arrangement.
After all this kept the peace for 40 years after the war.
28 May 2009 at 13:31