Showing posts from August, 2011
Show All

August 25, 2011
My column from News Letter 25 August 2011. SPECIAL advisers, or Spads as they’re generally known, are a rather unique type of civil servant. Appointed directly by ministers, they aren’t required to go through a competitive recruitment process and their role is openly political. Spads do operate within certain limits; for instance they can’t get involved in campaigning during elections, but they’re bound by no requirements of impartiality. There’s nothing wrong with that per se, but it means that, effectively, the taxpayer foots the bill so that ministers can receive highly political advice. Obviously such an arrangement should carry with it some pretty strict responsibilities, because while parties and ministers pick Spads, it’s the public that pays for them. At Stormont, though, the special adviser role seems be shrouded in secrecy and recently it has attracted one controversy after another. There was widespread revulsion earlier this year when Sinn Féin culture minister, Caral Ni Ch…
5 comments
Read more

Guest post: What does a vote for Sinn Féin really mean?

August 23, 2011
The following is a thought-provoking guest post by itwassammymcnallywhatdoneit.  It's interesting because it rather flies in the face of the usual nationalist analysis: i.e. that a vote for Sinn Féin does not necessarily imply any degree of approval for the IRA's campaign of violence.


Berty Ahern,  famously opined that SF and the Provos “are two sides of the same coin”.
Now, if we leave aside the boul Berty’s general tendency to get things wrong (especially when he was Taoiséach) and if we also leave aside the amusing protestations of President Adams that he has never heard of the IRA (or whatever it is Gerry likes to tell us from time to time) and assume that on this one at least, Bertram is on the money, then what does that tell us about the majority of the Northern Nationalist electorate who vote for SF?
Well, it surely tells us, that Northern Nationalists have, at the least, an ambivalent attitude to the Provo’s campaign of violence. It surely a…
326 comments
Read more

It's nearly six months late, but here's my take on Northern Ireland's rather bizarre trip to Serbia.  It's an early, diary style draft of an article which appeared in Four Four Two magazine.

They’ve become known simply as ‘The 200’.  A group of Northern Ireland fans determined to defy security warnings and a UEFA edict in order to attend their country’s Euro 2012 qualifier in Serbia.
It’s 1.15pm on Friday 25th March and FourFourTwo dashes across Budapest airport on a mission to join these steely souls.I reach the gate just as it closes and collapse in a sweaty, panting heap on the connecting flight.Next stop Belgrade - home of the most feared football hooligans in Europe.
Violence at Serbia’s last qualifying match in Italy led UEFA to rule that the game against Northern Ireland at Red Star’s ’Marakana’ Stadium should take place behind closed doors.After protests from the Irish Football Association (IFA) the authorities grudgingly agreed to admit travelling fans who boo…
149 comments
Read more

The following is a guest post from itwassammymcnallywhatdoneit, who well be well known among Slugger readers.  Thanks to Sammy for a great pre competition analysis.  Coincidentally I'm off to Dublin on Saturday to see the Irish team prepare for the competition with another match against France. On the 9th September the Rugby football world cup kicks off and for a sizeable minority on the island of Ireland this will be the major sporting event of this year – if not the last four.
Ireland, share group C with Australia, Italy, Russia and the USA and if the form book proves reliable, we will qualify as runner-ups to Australia and exit at the quarter final stage to South Africa. Rugby, doesn’t tend to do surprises and the winners, on home soil, are likely to be New Zealand, the strong bookies favourites at 8/15.
Four years ago in France, Ireland were tipped as the dark horses (and with some encouragement from the Irish camp) and then immediately set about proving wrong, those who had mist…
19 comments
Read more

Democratic Unionist Party are on moderate ground ...... in Sudan

August 12, 2011
I've been reading The State of Africa: A History of Fifty Years of Independence, after a trip to the Gambia earlier this summer and I was rather startled to discover, in a chapter about Sudan, that the blighted East African country has its very own Democratic Unionist Party.

No doubt the knowledgeable readers of Three Thousand Versts (if any still remain) will be way ahead of the curve on this fact, but it came as a revelation to me.

Now Sudan is not renowned for its history of religious tolerance.  Indeed it provided sanctuary for Bin Laden in the 1990s and it was widely regarded at the time as the country in the world with least religious freedom.

Even back then the Democratic Unionist Party in Sudan campaigned for pluralism and state neutrality as regards religion.  Get your heads around that Northern Irish readers!
1 comment
Read more 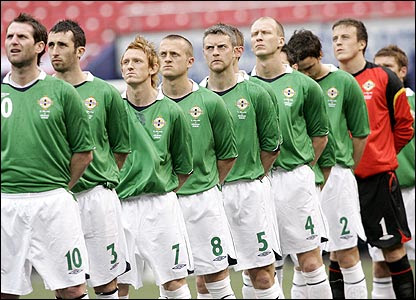 It may have seemed a little premature, given that the race to reach the Euro 2012 finals in Poland and Ukraine is far from resolved, but on Saturday evening FIFA conducted the preliminary draw for the World Cup in 2014.The tournament will take place in Brazil and Northern Ireland supporters now know the hurdles which their team will face if it is to defy the odds and make it to Rio.
Predictably it’s not going to be easy.
First out of the pot in Group F was little Luxembourg.In theory the lowest ranked team needs to offer up a simple 6 points, if we have any aspirations of qualifying.Mind you we saw how that can easily go awry in the Faroe Islands last autumn.Luxembourg is not the worst side in European football by a long stretch, that title’s reserved for San Marino, and they form exactly the type of stumbling block which Northern Ireland has traditionally failed to avoid.
The 5th seed in our group is Azerbaijan.In the 2006 qualifying tournament we took 4 points out of our 2 games a…
15 comments
Read more
More posts