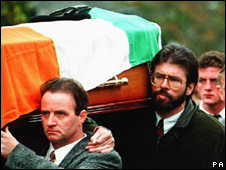 Gerry Adams’ influence within Republicanism might be on the wane, but he has lost none of his capacity to astound and revolt. First we had Adams’ interview on Christ and forgiveness. Now another clear example of the Sinn Féin president’s warped morality has emerged.

Speaking about ‘Republican honours’ accorded to his father, who had repeatedly abused children within his own family, Adams’ observed,

“I didn’t want him buried with the tricolour, I think he besmirched it.”

It is impossible to read this statement without reflecting on a succession of IRA funerals which Adams was happy to attend. Thomas Begley, who killed himself in the process of murdering nine Saturday afternoon shoppers on the Shankill Road, clearly did not ‘besmirch’ the tricolour, in Adams’ estimation. He was happy to act as Begley’s pall bearer.

Gerry feels that emotional, physical and sexual abuse of children brings shame on the Republic of Ireland flag whilst murder, maiming, torture and all manner of other crimes all add to its glorious legacy. His hypocrisy is nauseating.
Gerry Adams Northern Ireland Republicanism Sinn Fein terrorism

Anonymous said…
Not wanting to sound like a defender of Provo thugs - which I most certainly am not - there is a consistent morality here.

Those present at the Shankill bombing had either renounced their right to life by being "enemy leaders" or simply on the wrong side of the sectarian divide. C'est la vie.

The hypocrisy comes in when we consider that, as fascist murder-gangs go, the Provos outstriped the security forces as killers of the very civilians (i.e. RC) they claimed to represent, and were pipped to the top of the list only by the Red Hand loonies.
21 December 2009 at 11:12

Seamus said…
Gerry Adams, like the majority of Republicans, believed that the Armed Struggle was a war. Thus killing in that war wasn't considered murder.
21 December 2009 at 11:48

Anonymous said…
I always did wonder how they were able to excuse the 'death' of Jean McConville.
21 December 2009 at 13:30

Anonymous said…
Is it me our does Gerry seem more preoccupied about protecting the Tricolour (at his Dad's funeral) and the wider Republican movement (when his brother was getting involved in SF in Dundalk) rather than dealing with the problem of abuse by his father and brother.
The poor warped idiot. We always knew he was warped but never guessed he was THIS warped
21 December 2009 at 16:04

Anonymous said…
Question of genuine ignorance, what did Adams Frere get up to in Dundalk? Nowt to do with the Continuity, and maybe Omagh, I hope.

The previous poster raises a fair point about normalacy. Shooting an unarmed, five foot nothing woman in the back of the head and burying her in an unmarked grave is obscene, but if she were thought to have been a 'collaborator', it could be described as sadly normal human behaviour.

But, putting the abuse of one's own family members to the back of one's mind is no more normal (especially if a known loose-cannon was permitted to a position of authority in said beloved movement, as appears to be suggested) than the treatment meted out to that nun, whose name eludes me, who was hung out to dry by her own Order on spurious child rape charges.
21 December 2009 at 18:03

shane said…
The numerial incidence of child sexual abuse is vastly larger than in popular estimation. I welcome Adams' revelations for they may help bring this sordid issue more into the public domain. Unfortunately media focus seems to be exclusively on abuse committed by clerics or politcians which are incidental to what is really an enormous epidemic. About 21% of girls and 11% of boys in England & Wales are subjected to some form of contact sexual abuse when under the age of consent according to the Home Office in 2007. Near 1/3rd of abused children reach adulthood without ever informing anyone of their abuse.

Acording to the Sexual Abuse and Violence Report in Ireland (SAVI) 2002, undertaken by the Health Services Research Centre at the Department of Psychology in the Royal College of Surgeons in Ireland (the same body that conducted the report on clerical abuse for the Catholic hierarchy):

* One in five women reported experiencing contact sexual assault as adults with 6.1 per cent of women experiencing unwanted penetrative sex (ie rape). That is over 76,000 women raped during their adulthood.

* One in six men (16.2 per cent) reported experiencing sexual abuse in childhood, with a further one in 14 reporting non-contact abuse.

* One in ten men (9.7 per cent) experienced contact sexual assault as adults and 0.9 per cent of men were subjected to unwanted penetrative sex as adults.

* Most of the perpetrators of child sexual abuse were men (89 per cent) acting alone.

* In the case of the abuse of boys, only one in seven (14 per cent) was a family member, two-thirds were non-family but known to the abused boy and only one in five were strangers.

* In the case of sexual violence against adult women, one-quarter of the perpetrators were partners or ex-partners.

Gary said…
Love what one poster said, "the Provos thought of it as a war" nonsense, and all the lovely wee stats about abuse throughout the British Isles added by another! Tis great wee ways to normalise the Grizzly Bears life. FFS wise up.
26 December 2009 at 20:36