The Illusion of Freedom - Scotland Under Nationalism. Review. 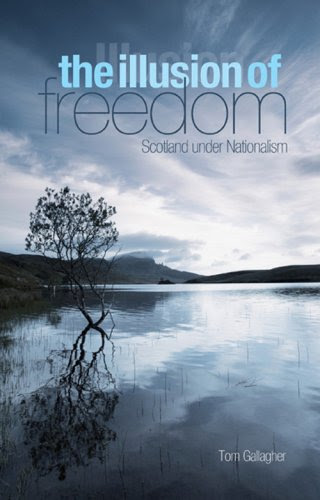 Tom Gallagher is not by temperament or inclination a unionist. His book, ‘The Illusion of Freedom’, questions the effectiveness of the SNP’s leadership of Scottish nationalism, but does not reject, explicitly, the legitimacy of the party’s aim of independence. The author is critical of the personality cult surrounding Alex Salmond, his party’s cronyism and clientelism, its confused economic policies, the Anglophobia associated with its chauvinist doctrines, but Gallagher treats as axiomatic the assumption that Scotland, as a nation, must enjoy a high degree of political self-expression in order to flourish. If he eventually rejects Salmond’s separatism, it is because he believes it leads to an inward looking, socially conservative, centralist state, not because he subscribes to integrationist unionism.

‘The Illusion of Freedom’ consists of two parts. The first charts a fairly brief history of Scotland, stretching from the Act of Union in 1707 until the Scottish Parliament’s reestablishment in 1998, with particular emphasis on the role of nationalism, in its various guises. The second focuses on the post devolution settlement and, most pertinently, the SNP’s custodianship of the Scottish Executive since 2007.

Gallagher is not afraid to deconstruct shibboleths on either side, insisting, for instance, that unionism, in its original form, was as much a product of Scots’ enlightenment thinking as English expansionism. Unionists will read passages of the book with equal discomfort. The British state is often portrayed as a centralising monolith which suppresses Scottish cultural identity. Gallagher consistently advocates more devolution, rather than less, and more concessions to a separate Scottish identity, rather than fewer, as the best means to govern Scotland, whether it remains part of the Union or not.

Rather than interpret the SNP’s current prominence as a baleful consequence of ill-advised, asymmetric devolution, the author is more inclined to bemoan a failure of UK parties in Scotland to reflect a specifically Scottish ethos. The Scottish Labour party, nervous of inflaming nationalist sentiment and circumscribed by its central apparatus in London, he indicts for not sufficiently advancing the interests of Scotland, during its period in government. It is an approach which Gallagher applies to the full sweep of post Union history. The Scottish Conservative party is criticised too, for moments when it chose to neglect ‘national expression’ in order to pursue a more conventional unionist project.

‘The Illusion of Freedom’ argues, then, that it is the unionist parties’ omissions which have provided the space for the ascendancy of populist nationalism, craftily masterminded by Alex Salmond. Gallagher wants more decision making devolved to Holyrood, more fiscal powers migrated to Edinburgh, Scotland’s identity to be reflected more robustly in its regional institutions, but he also abhors the manner in which the SNP has carried out its duties since it formed a minority administration in 2007.

And it is his devastating verdict on the Scottish National Party under Salmond which comprises the strongest material in Gallagher’s book.

The First Minister’s devotion to the Royal Bank of Scotland, and his stout defence of its policies even after it was bailed out by the British taxpayer, is scrutinised closely in ‘The Illusion of Freedom’. Despite the demolition of financial models underpinning his case for independence, Salmond was able to brazen out the crash by concentrating on populist themes and ignoring substantive economic criticism.

The nationalists’ tendency to take various interest groups on as clients, and interact with citizens through the medium of group rights, is also explored. Gallagher is particularly interested in the SNP’s Islamist connections, which he charts in detail. And Salmond’s conscious attempt to court traditional Catholicism, with a Janus-faced approach to social issues, is highlighted, along with the party’s steadfast refusal to combat sectarianism.

The most prominent nationalist characteristic, however, and one which the author particular deplores, is a tendency either to ignore Scotland’s problems altogether, or blame them on the larger neighbour to the south. He finds SNP rule short-termist, populist and quick to blame England for any underlying problem, rather than offer constructive policies in order to deliver a solution.

Whether you agree with the interpretation of the UK’s constitution which underlies its argument or not, this book is a substantial polemic against Alex Salmond and his party. It is carefully researched and engagingly written. Anyone who wishes to understand the nationalist dynamic in modern Scottish politics should read it.

DougtheDug said…
It is carefully researched and engagingly written.

Gallagher is a loon. Have a look at some of his posts on Harry's Place especially this one.

It's filled with references to facism, Mussolini, Hitler and Red China all linked into analogies about the SNP.
27 October 2009 at 20:47

If Salmond were the egotistical monster that Gallagher claims he is he would never have resigned the leadership of the SNP.

Hitler, Stalin, Mussolini etc etc never did any such thing.

Dewi Harries said…
"...along with the party’s steadfast refusal to combat sectarianism"

Owen Polley said…
Maybe you should Dewi. His point is that the SNP has actually sidelined some of the initiatives by which sectarianism was being tackled. His point isn't that the SNP is sectarian (although it's history isn't lilywhite) but that it is inclined to duck the difficult problems and stick to aesthetic projects.

Incidentally - there are no serious comparisons to Hitler, Mussolini or China in this book.
28 October 2009 at 09:55

O'Neill said…
To decide on whether a book is carefully researched or not, one would presumably first have to read it and I'd be interested to know if his strident critics here and in the Our "Nat Echo-Chamber" Kingdom have actually gone that far before resorting to the personal name-calling.

"Gallagher is a loon"

Yet for a "loon" he sure seems to really get under the nats' collective skin for some reason.

A bit about his background would probably be useful here for those who haven't heard of him before; he's the holder of the chair of "ethnic peace and conflict" at the department of peace studies, University of Bradford. A lot of his work is concerned about how religion and nationalism has been a source of conflict in post WW2 Europe. He's done a lot on the collapse of the Iron Curtain and more importantly, on how the mix of religion and nationalism led to the civil and ethnic conflict in the ex-Yugoslavia.
28 October 2009 at 13:50

I must admit I've not read the book but I have read Tom Gallagher's various postings on Harry's Place, on "Our Kingdom" and on the Prospect web site.

He's obsessed with Alex Salmond, convinced the SNP is some form of "blood and soil" outfit and though he professes to be a nationalist he recycles sound bites and attack lines from the Labour party endlessly.

None of his opinions stand up to any scrutiny and he can offer no evidence for his assertions.

I would describe him as a disorganised thinker with obsessional issues about Alex Salmond and the SNP but "loon" is much shorter and just as applicable.
28 October 2009 at 15:30

Anonymous said…
Wind them-up, watch them go. What appears to have been overlooked by the crack cyber-commandoes who're ready to be dropped into these threads with a moment's notice is that Gallagher's online articles tend be *opinion* pieces.

That is, what we see in every newspaper, and what bloggers and blog-commenters do pro bono. But, these naysayers' opinion is worth more than Gallagher's.

No argument has been offered, no actual demonstration of why an article is to be considered barking-mad... no nuance, no debate, just absolutist declarations.

And then the commenters have the nerve to poke fun at Gallagher's accusations of totalitarianism!

>> If Salmond were the egotistical monster that Gallagher claims he is he would never have resigned the leadership of the SNP.

That's you're interpretation. Salmond has taken on the role of First Minister, and imagines himself as the first President or (Proconsul for Her Majesty) if he can't make it to UNSG/

Dhaibhidh C Mhac Dhuihdhlheigh said…
I have written before on Professor Gallagher's forked tongue.
28 October 2009 at 20:27

February 08, 2013
Wednesday was another dark day for international football in Northern Ireland.  Michael O’Neill’s side drew 0-0 with lowly Malta, a team made up of part-time players, meaning that the manager has yet to achieve a win, after 18 months in charge. That’s not the reason, though, that it was a dark day for Northern Ireland football.  Managers come and go, players are capped and retire, lose form or fall out of favour; matches are played and sometimes the result is good while more often, particularly in friendly matches, it is bad.  The only thing that should be constant is the honour of playing for one’s country.  The Irish Football Association can change the international coach, revitalise the playing panel, modify tactics, but the prestige attached to the award of an international cap, if it is diminished, cannot be recovered. That’s why by far the most significant event on Wednesday evening was the selection of Alex Bruce and his participation in 70 minutes of a grim, lackl
Read more

September 17, 2008
Former BBC employee Brian Walker has overrun Slugger O’Toole lately with countless poorly structured, poorly written posts. It is possible quickly to recognize and avoid these by subjecting each Slugger piece to a cursory inspection and identifying those which feature characteristic lack of paragraphing and a tenuous grasp on the technicalities of linking source articles. Although I generally evade Walker’s posts by this method, occasionally (and unfortunately) I have persevered and found that their content is as unrewarding as the style in which they are written. Today, for instance, I inflicted upon myself Brian’s thoughts on a mooted Fianna Fail / SDLP merger . In actual fact, he is right to welcome news that the Southern Irish party has dropped this proposal from its agenda; however, the logic by which he arrives at this conclusion is parochial nonsense. To summarise, Walker believes that pursuing realignment with larger parties, whether they are from the rest of the UK or fr
Read more